I have been using Locus Map for a while now. Occasionally I edit small things in OSM. For this purpose, recorded tracks are helpful (beside satelite pictures provided by OSM) improve th position of ways and streets.

After a break of months I now recorded a small way. This is done with the track recording function and the profile walking. It is attached with yesterday's date. Now I downloaded a one year old track from OSM, attached as 314...

The formal difference between the file is, that the old file records a gpx track, whereas the new one is a gps route. OSM seems to accept only gpx tracks.

I didn't find a way in locus to record the ways as tracks instead of routes. I also cannot reproduce, how I made the old record. The smartphon in both cases is the same Samsung Galaxy S7. Locus Map version is now 3.48.2. From the file I read last year's version as 3.40.2.

Now, the question ist, what can I do to get useful tracks for OSM: https://www.openstreetmap.org/

Thank you for you reply, best wishes,

It works for me. I record normally with track recording and export it to Gdrive after saving. It is then imported into OSM from there. Did you export it as a gpx? There is also the possibility of uploading directly from Locus to OSM, but I haven't used it for a long time.

I even set points within the track (in the recording panel) I will see them later with this name on OSM. e.g. where there is a bench. Info sign etc.

These tracks with dots also work for me.

Sorry for all. I found the solution. On the track export panel I can choice between exporting as track or route.

for exporting tracks to OSM as OSM traces, the best way is the direct export. When exporting the track, tap the export type icon > export type selection emerges > select OSM 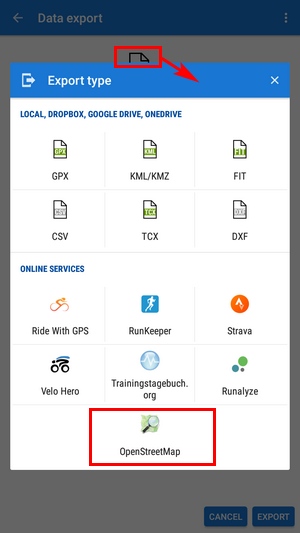 > log in, add a description, tags and choose the type of visibility (identifiable, public, private...) 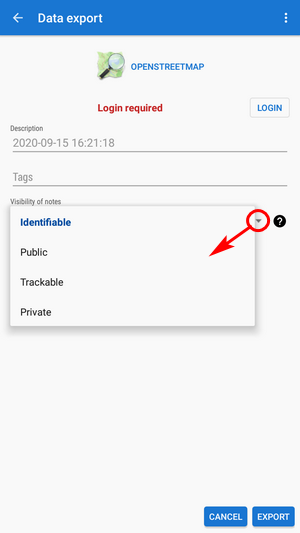 Tap "Export" - you'll find your track among OSM traces on the OSM web.

thank you. After a while I found your solution in my app. Here you must tab on the GPX sign on top of the export panel, see screenshot.