Displaying embedded waypoints on a track

I have bicycle route track files that are generated with RideWithGPS. These GPX files contain the track AND waypoints that could indicate POIs or turns. How do I get Locus to Globally display the related waypoints in each GPS file? All I see on the map is the track without any waypoints.

- As far as I understand RWGPS gpx (did) (do) not contain the necessary turnindications usefull for Locus navigation by gpx.

- Advise @ import select merge points with track. (If not the points and the track are separated into different folders)

By the way. For optimal navigation by RWGPS export - select tcx out !

generally, Locus Map offers to include waypoints in the route or detached in an extra point folder when importing a route. What is the case with RWG files? Could you please share some file from RideWithGPS for testing? Thanks

I found an older original gpx file by RWGPS.

In all RWGPS waypoints find <sym>Dot</sym>.

RWGPS Dot is not compatible with Garmin nor Locus Icons set.

So the default <sym>Waypoint></sym> Icon is displayed.

A Waypoint Icon is a very small tiny black dot !

If I zoom in almost ALL the way I see the VERY small black dot! Is there any way to make this indicator a constant (visible) size regardless of map zoom level? I am used to Orux which does this just by loading the GPX file.

I am attaching a couple of different files. One is RWGPS track with rest stop waypoints.

The other is a KML file produced by Google maps that contains waypoints only to mark hazard trees to be removed from a trail. I haven't tried a KML import yet so don't know what Locus will do.

I may try TCX in future. For long tours I normally need to preserve battery life so don't use turn navigation as it leaves the GPS receiver always on and burns battery. Normally I just wake the phone periodically to verify location and check position. Can you turn off navigation with TCX and still show route/track on the map?

when importing the GPX, don't merge the points with the track so that the points are better displayed on screen: 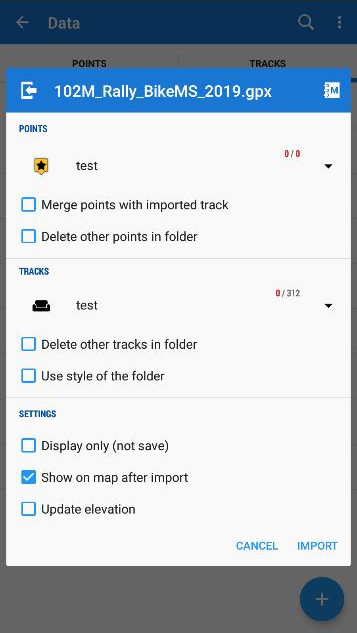 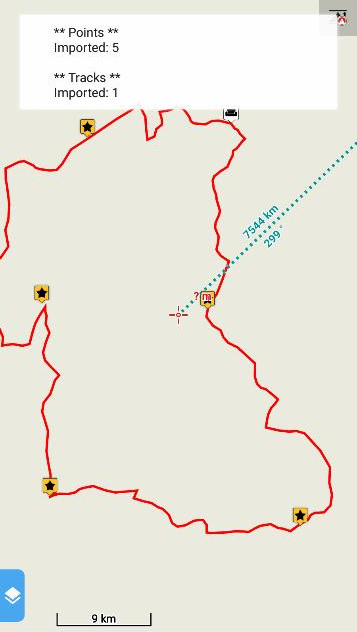 The KML you sent contains just a few points: 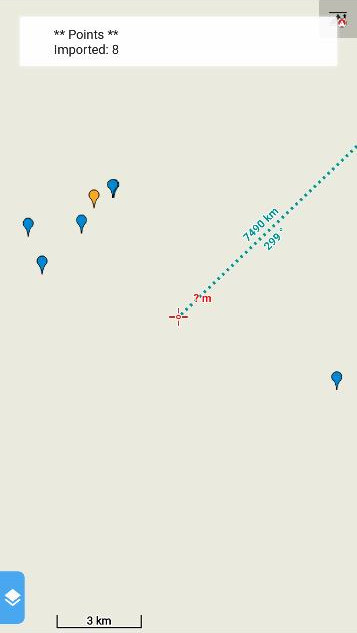 And of course, you can just display the track without navigating it.

As I see a first reply by Michal. ( Indeed another good and simple solution, by separating into a track folder and a points folder)

If you however prefer to keep the points attached to the track file find more info here: (no direct solution offered)

Ok Steve..so at least the waypoints are shown.

Locus already had some changes before, but sure never will satisfy each individual customer. - Unless Locus would offer free choice "Default Icon" display ! - (Idea ? ) -

By the way ..by Garmin also offers no free user choice default Icon, unless you are changing default Icon by complex registry editor change.

Steve it is a pity (premium_payed feature) that RWGPS does not offer free choice Icons for each single attached information wpt ? That would comfortably solve your issue. I'll attach you an re-edited example file, so you exactly see what I want to say. I just picked up some Garmin Icons out of the 266 available ones.

Sure you must not start Navigate at import. You can just display. Turnindications are shown as blue (medium sized) dots. Generic is shown as Flag. Give it a try ( sure navigates perfectly). If more questions after some test, report here.

Steve, as indicated the solution by Michal is functional. But personally I do not like the separation. Because at multiple import into the database you will create a complete mess, by the separations. Ex. deleting the onscreen track you will find out the the displayed points are not removed. So 2 actions for a simple delete or hide are necessary.

And the organisation of the database becomes very difficult.

After a while (by the separation) your well organised method will soon fail.

In my language there is a saying. (Free translation..hope it sounds correct)

"In such a nest the cat cannot find anymore her boys after a while."

Thanks for everyone's input! Separating tracks from points seems like a dead-end. Changing the default waypoint icon appears also to be a non-starter.

I do think that Locus should allow a choosable default icon that is visible regardless of map zoom level. For bike navigating normally you are zoomed out quite far.

So it looks like I need to "upgrade" my choice of file type when using RWGPS. The main reason for choosing GPX Track to begin with was it was one of the few file formats supported by Orux.

Next question... Is there a way to globally clear the map of displayed tracks and waypoints without having to open the track select, the proper one, and then turn it off? Orux has this as a one-button feature.

I have decided to take an example route in RWGPS and expot it to all of the current file formats so that I can check out the icons and other features of each format. I will post them here so that you can see what RWGPS currently offers for route files and how well they work with Locus.

I just tried the import and Locus didn't like the *.FIT file for some reason. I don't know if it is supported or not. Here is what RWGPS says about the *.FIT format...

Well, that was a pointless experiment... Locus doesn't display the source file name so there is no way of knowing what format I am looking at!... Start over...

KML - Uses a thin red line (that looks like roads on the map!) for the route unless overridden by the default folder properties. No waypoints.

TCX - Adds a waypoint before every turn, I assume, for navigation.

- Icons are displayed for waypoints but don't match the RWGPS Icons.

- File name appears to be limited to 15 characters. Makes it very hard to describe (and find) a route (among many) unless they can be grouped into folder trees. Once found and loaded this is not a big deal.

1. I do think that Locus should allow a choosable default icon.

If you expect such, you should propose in New Idea section, so people can vote for it. Roger ?

2. KML - Uses a thin red line (that looks like roads on the map!) for the route unless overridden by the default folder properties. No waypoints

3. TCX - Adds a waypoint before every turn, I assume, for navigation.

In RWGPS generator you should not advance the position of the turn generation markers, that's only necessary for some (imperfect) Garmin gear. Locus navigation will, before turns, correctly announce just in time. Corresponding to your avg speed. + various personalised (one time) fine tunings are possible. But let's start step by step. ok ?

4. Icons are displayed for waypoints but don't match the RWGPS Icons.

By RWGPS stores are indicated by a best corresponding tcx PointType Icon. (Only 16 PointTypes available)

a. I do not know (not tested) if RWGPS generator do support (all by the file standard limitations) Icons.

5. File name appears to be limited to 15 characters.

A limitation by the Garmin tcx standard. Another limitation is name limit 10 characters.

By fit standard some more but also has such a limitation + has even other strange limitations, as fit does not even support additional info transfer in <Notes>.

A nice universal (for navigation)small size file format ? Brrr...I absolutely do not think so. (A zipped gpx is also a small sized file format)

By RWGPS: Not recommanded. (See in RWGPS note...should be avoided)

I know by a previous test the Plotaroute web generated .fit files are displayed correctly. (I do not use)

Have to ask some help for this RWGPS generated problematic file by the Lous team. (Binary format)

Thanks for taking the time to check out all of these different file formats! It looks like we are running into some Garmin and specific file limitations.

For what it's worth, RWGPS appears to be the 800 pound gorilla in the room when it comes to bike navigation so it would be good for Locus to support it as much as possible given the specific file format limitations.

Regarding (3) above RWGPS allows 5-100 meters distance before turns for TCX file. Default is 100 meters.

As for Icon support at the current time almost anything that is easily visible on the route is better than the small black dot. A user selectable icon would go a long way in helping this out. Riding a bike on the road is like driving a car... you can only glance at the map for a very short amount of time without crashing!

Regarding (3) above RWGPS allows 5-100 meters distance before turns for TCX file. Default is 100 meters.

Not usefull to add more or extra (disturbing) alerts for Locus. Optimal @ export > 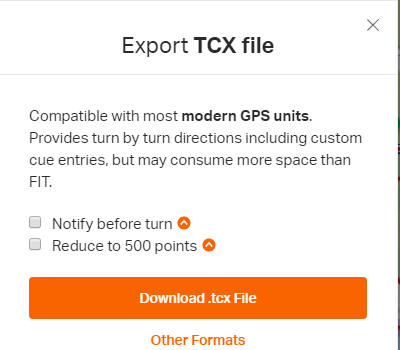 And hi Steve, add proposal abt default waypoints, into the Idea section !

"And hi Steve, add proposal abt default waypoints, into the Idea section !"

How do I do this? Open a ticket? Open a new topic as an "idea"? Something else?

Open new topic in "idea". Formulate what is expected. Nothing else. Just wait for + votes. Locus team will pick up according to simplicity and popularity. Succes !

By the way I just finished you some gpx files that are compatible for direct Locus map navigation.

A manual job so I hope no mistakes.

2. Find a gpx track with the navigation waypoints. = Most similar with the tcx method and the RWGPS export.

Thanks for hand editing those files. Unfortunately this is working waaaayy too hard for something that should be much easier.

It would also be very helpful to update the Manual/FAQ on the best practices to use when interfacing to different applications like RWGPS. It would save users a LOT of wasted time using trial and (mostly) errors.

Hand editing/ My edit was fast by cut and paste. And only once , for gpx file demo purpose.

Was just showing you the possibilities by gpx. More capable/less limitations than ( ....)

A pity there is no such a general official gpx navigation standard, it seems no one ever proposed ?

Anyway should be no problem for the RWGS guys to introduce such, by easy adapting the <sym> info.

But it seems too little general user interest probably ?

the FIT file you sent revealed a bug in Locus - it will be fixed in the next version (or Beta, coming out probably tomorrow)

regarding your proposal to update Locus Manual with section dealing with actions in RWGPS and other apps towards Locus. I'm sorry but we have to decline it. We are developing Locus Map and we are doing our best to make it versatile enough so that our users are not in need of other apps. Nevertheless, we respect that there are other apps and therefore there are many options how to export Locus tracks to them directly, including your favorite RWGPS: 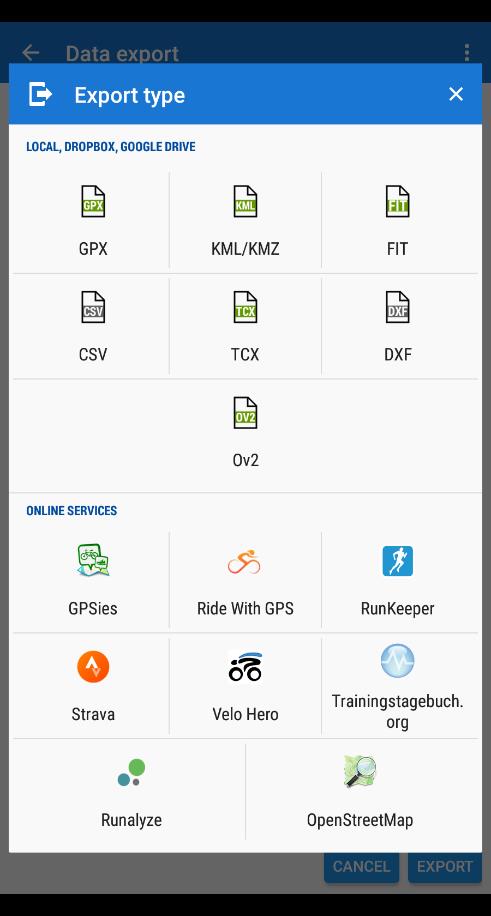 Steve you can contact me by PM for more (easy) use hints.

I think some will serve you, before the new idea realisation is (eventually) realised.

Since this request for a configurable default icon has not gained any traction I think I have found a possible work-around...

The default "small dot" icon is apparently fixed in color as black. To make them more visible on the route just change the route color to something other than the default deep blue. I have now chosen the light green so we'll see how that works out.

I have a week long bike tour next week so should have plenty of testing time!