I was using Locus Pro v3.25.1 a lot this week to record hiking tracks (OT: and I found it's crashing more frequently than before when using the widget, so I sent you many crash reports for this!).

After reviewing the recorded tracks, I noticed that some of them exhibit jitter and deviation from the (OpenAndroMaps vector) map when GPS accuracy is not very good due to thick greenery. Consider for example the screenshot below. 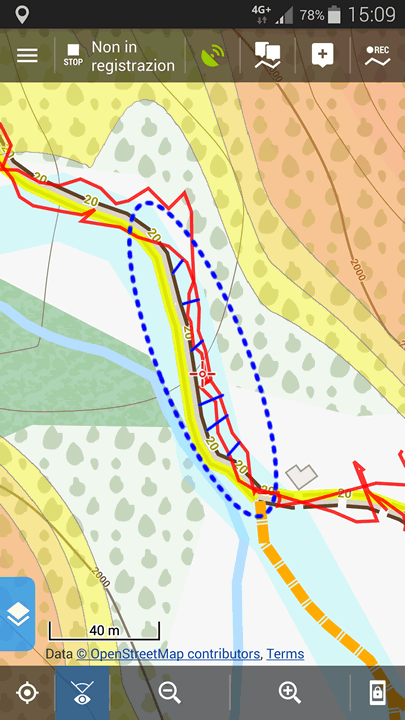 If you focus on the dashed blue circle you can see the deviation from the path named "20" which I actually followed. So I'm proposing this idea: would be possible on the track editor to "adjust" part of an already recorded track (for example by selecting a rectangular marquee) to match the map? I say "part" because you as a hiker actually know when you followed the map track or went off-track...

feature of Locus works very well when drawing routes, so why not applying the same algorithm to fix tracks recorded in wrong way, either manually by selecting part of them or by checking high PDOPs?

I also Googled about map matching and saw that there are references to some libraries for example HERE and HERE. There are also some posts about many Strava users who used the Raceshape.com "SNAP" feature now discontinued, which did basically this thing I'm talking about.

The same might be useful to clean this situation too: 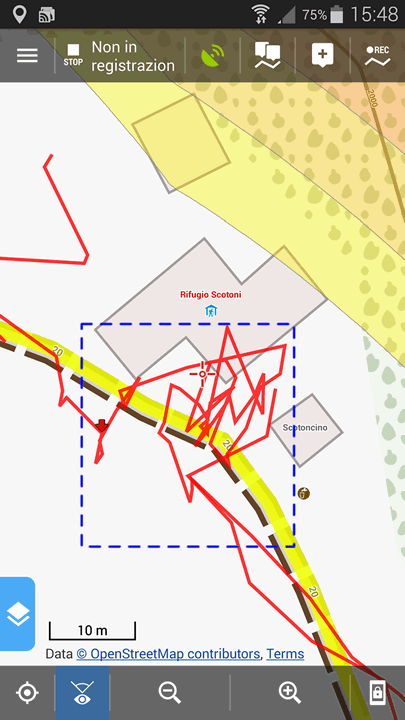 ... when I basically forgot to put Locus in pause before entering the refuge/hut. When using the stats this jitter distorts the data.

Let me know if you think this may be an useful idea for a new Locus version... or just trash it if it is not ;-)

This is a very good suggestion. Virtually every recorded track on any device will jump around paths. Locus has path information, as it has maps and it can access brouter routing files.

It would make track recordings totally realistic, if it aligned track points to the closest path (plus some intelligence needed, it shall not use a close, but unlikely path).

Locus could ask for track alignment on save.

In my example I was on the path all the time.

Yes, finally someone who supports my idea... I wish Menion could implement it, maybe with a sort of "magic wand" brush tool that when touching part of a track "snaps" it to a path on the map.

In this way the user can correct the track exactly like he wants.

Yes of course. I was writing about it at some places, I think in forum. I am a big fan of post processing tracks and track analysis. On PC there is(was) "GPS Trackanalyse .net" which is one of the few programs to do some post processing on tracks and also analysis. My opinion is, Locus could easily take the leadership here,

E.g. I was asking for auto adding pause waypoints to tracks via track analysis. This is what above software can offer.

Hasn't GPS Trackanalyse. net been discontinued? I read that Track Guru should have replaced it, but personally I use GPX Editor for my hiking needs.

Any update on this topic ? This feature will be awesome!

Tracks are very inaccurate in forest. I manually correct them but it is very time consuming !

I even thinking about DIY GPS with great antenna to improve accuracy, but I'm not sure if it will help 🙂