I'm using LoMaps, but when I zoom out I find them prettty useless. I would appreciate more details - more city names, more roads.

I used Road theme in attached files, but other themes are more or less the same.

Roads appearing in Road theme at too high zoom levels

Unless changed in beta...

It seems to me the road classes appear in Road theme too late, at too high zoom levels, especially secondaries..

IF you choose at Z11 the area NE to the City of Brno ( Czech Republic ), with Adamov or Boskovice near SW map corner, there is literally near nothing on the map. No roads but few rivers and eventually hill shading.

Imagine much less populated countries than those in Europe, with sparse road networls. In such a case, finding roads can become funny smartphone game.... :-)

I have to say that main idea of ROAD theme is simplicity - to offer theme that render map quickly. Honestly it's quite tricky to define balanced theme that shows correct information in country side or in urban areas. For example the road labels are limited due to overcrowded motorways in Germany. (with old theme was Germany map full of road labels)

To you first screenshot

you say more cities but there is only one city on your first screenshot ;). I guess that you have set higher map resolution that increase the problem of "empty map". But there is probably something wrong because you should see for example Kosor, Dolni Brezany on your screenshot. Would you please send me your screenshot of southern part? For example with center in "Jilove u Prahy" (again in zoom-level = 12)

I've tried to improve the theme based on your suggestion: more cities, more labels and I don't think if it's better - see attached screenshot.

I can understand you but the theme is developed for usage together with World base map ( you can download it from Store > By Region > Worldwide > Maps > World base map). It could get better result with in level=8

This is not good solution. I don't want to switch maps when I'm planning trips - especially when I'm using native maps and themes.

I usually use higher zoom levels to find a cities/areas when I'm completely offline or without data (in moutains with no gsm or when I want to avoid roaming - ie. 1MB/10€ in Switzerland). Big flat green with nothing else doesn't help :-)

World base map works in different way. It turns on automatically when you zoom-out to level < 9.

I've merged these two ticked because are quite similar. I've tried to quickly change themes based on your suggestion. The results it's fine for Czech are but see the second screenshot from Germany - useless :( I see the point and you slowly convinced me to little bit change the road theme. But I don't really want to create copy of some paper Car Atlas.

Perhaps a switch for dense and sparse areas, for the latter to display roads sooner ?

Like a road analogy for Elevate/Elements OAM theme for dense and sparse outdoor ?

As one size fits all very seldom.

Making themes is a trade-off work manoeuvring between 2 extremes:

- to have it crystal clear and legendless, display little and being useless by swallowing most of useful information.

- to have it rich, display much and being useless by confusing with information flood and big legend need.

I understand focusing ROAD theme on roads themselves and I agree with minamalistic approach. OTOH, for roads themselves, it should provide relevant useful information and avoid oversimplification.

Existence and class of road are relevant useful information. Too few roads is as bad as too many.

Germany definitely needs something different than Arizona or Australia.

I like in this context idea of Waymark theme.

It has for road&city scenario a switch "way road low zoom", affecting zoom level when minor roads/way start to accur ).

If implemented to internal Road them, if could be named like "Sparse roads" and could shift zoom levels 1-2 levels down.

Sorry this isn't really my cup of tea. I can not imagine some option in themes that would change the visibility of line elements. And about minimalism - see the attached screenshot. It's from waze probably the most trendy navigation app. I do not want to create waze app but you can see that also minimalism can work :)

If minimalism leads to empty map of big area, I do not think it works.. :-) It is useful to see the road context that the route follows.

As alternative to explicit theme switch - Is possible to make a theme somehow adaptive to the road density in the area, like based on some internal road rendering counter ?

Example : Let be an adaptive zoom range for secondaries Z10-12

At Z10/11 secondaries would be displayed IF their tile count is lower then the threshold.

At Z12 secondaries would be displayed unconditionally.

Than they would be displayed since Z12

Than they would be displayed since Z10

This can be generalized to all road classes.

That's ins't such bad idea. But the question is how define the borders (area) for computing of the trashold. It cann't be map tile because touching tiles can have different densisty. Maybe some pre-processing during map generation. We could compute for example total lenght of secondaries for whole country. Compare lenght with country area and based on that defines some logic. But what about mentioned Australia, where is 95% country is empty and all population (roads) are acumulated in small areas...

It can be a median ( more stable ) or arithmetic mean ( easier ) for the already processed tiles. There could be implemented statistical model next zoom level has 1/4 of roads of the previous level, so various zoom levels can be compared. The adaptation would be triggered after some number of tiles was procesed to avoid initial instability. There can be implemented hysteresis for the threshold to avoid oscillations.

1/ There should be maybe displayed roads of the class of the current road and better, to provide road network context. E.g. If going along a secondary road, secondary roads and better should be rendered. As there is usually high zoom level due autozoom, the displayed should not be road-flooded.

2/ Instead of road count or road length sum, there can be counted the ahead crossroads along the route to be eventually displayed. If the adaptive zoom range ZN-Z12 was used for secondaries, they would be rendered at ZN-11 only if there would be max N crossroads ahead, e.g. 2.

I don't think that there would be some super-easy solution. I just wanted to report, that I'm not very satisfied with current maps. I think that you should meet with graphics and programmers and talk about that.

My personal opinion is, that highways should be marked with thinner line. You definitely cannot render mountain and industrial areas in the same manner.

Various themes and various contexts of these themes differ a lot.

Aside of internal themes, review set of available external themes - see Theme section on Locus forum , aside of Elevate/Elements theme (usable for LoMaps as well), I referred earlier )

Well... I don't wanna to behave like iUser, but... Man could expect that "default maps" (provided by app author) would simply work fine with "default themes".

It went better when I turned off maps > advanced > increase map resolution (was 200%). I'm using that with raster maps and it stayed turned on.

Well I've quite changed themes for level 9 - 16 (especially for ROAD theme). Some ideas are implemented some not... :) There are some screenshots. More in next version.

EDIT: one more from detailed level

I wish to request the inclusion of OpenStreetMap's "Shelter" objects in LoMap's "Hike & bike" theme.

Here is an example of the New York LoMap compared to the New York map used by OSMand (also derived from OpenStreetMap). 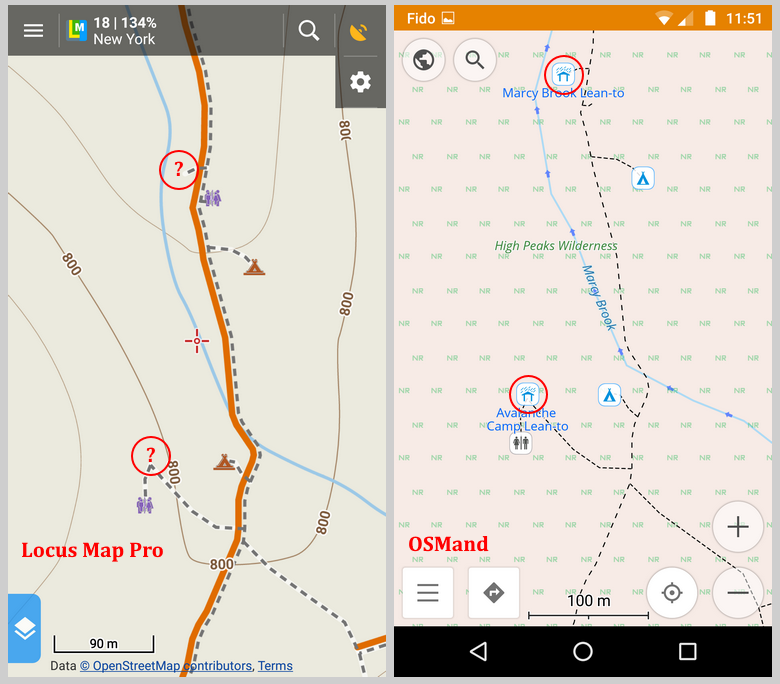 thank you for report! It'll be improved in next version of Locus Map app.