Vertical scale on the track chart

I use a lot the Graphic of a track, to know what we will face on the next day, or to see what we have done.

The only thing is : you can zoom the distance but not the altitude. And if there is a big peak during the day, everything else look flat... It would be great to allow a zoom also on the vertical part of the graphic.

Just an idea, nothing essential, though.

Just add something to this idea.

I always use long tracks, easier to create. But then the grap is unreadable because of the scale.

It would be so great to adapt the scale of the gradient and altitude to the part of the track that is shown on the screen !

Now, to do the same, I need to copy the track and cut it in small parts to really see the gradient and altitude properly on the part of the track that interest me...

Or maybe the one who use the graph can tell me how they deal with that ?

thank you for your idea and extra feedback. Unfortunately even that idea is clear, you may see that after more then year, there is no interest from other users.

I personally do not have sooo long tracks that I usually analyze on chart, to see this as a problem. In most cases, I appreciate global view, so even if I zoom in a lot, I still have idea how visible values stands compare to maximal & minimal values.

Also from technical point of view, it is little bit complicated imagine how it will work. Mainly how to make it user-friendly so chart won't just up and down below fingers when moving with chart.

I'll see this topic open mainly to see some feedback from other users if there will be someone interested, anyway to be true, I'm personally not a big fan of this idea.

Yes, I was pretty sure it wouldn't be a success. :)

I was just thinking again of this idea, because of the problem I have with editing tracks to make them shorter (other topic).

But I can understand that's too complicate, when I think twice about it...

Actually, this issue is just related to "aberration" (errors) on the chart, when there is a more than 20% gradient climb due to a tunnel or a bridge. What I do is that I cut the track in two parts, just before, and just after every bridges. Then, he scale come back to normal.

Anyway, it's just chatting. I was just wondering if I was the only one to be concerned about this. You can forget about this and even close the topic if needed. That doesn't prevent us to use Locus every day, since 2015 (already 39 000km of recorded tracks for now !)

thanks for explanation, appreciate it.

May you please attach me here one exported GPX track that has such huge values? I can't imagine how tunnel may cause such problems with gradient, so I would like to check it. Elevations are anyway generally a problem, so maybe it will be more a problem in recorded elevation value. For this may be useful improvements that will be in next version: http://help.locusmap.eu/topic/use-srtm-data-from-hgt-files-for-height#comment-32760 . Option to record only elevations received from SRTM files or just use stronger elevation filter.

Yes, and still 10 000km to go back home ! I'm planning the route in Iran and just found two good exemples :)

The first one is around Kerman : IRAN_Kerman.gpx.

Off course, it's not the real gradient : the road goes through a 2km tunnel, unknown by the hgt file.

Same for the second one, a 490km track between Shiraz and Yadz, with a tunnnel at km168.

Actually, instead of a automatic function complicate to implement, I was more thinking about a simple "adjust to screen" button that would adjust the scale to what is shown on the screen. When zooming-out, if the scale is not accurate, it doesn't matter : it will go out of the screen, and just a push on the button would put it back to normal...

But, anyway, that's clearly not a big deal, it just take some time every day to duplicate and cut files...

Thanks Karoutcho! I wasn't able to imagine how this may happen in real, but now it is clear.

Problem is not with recorded tracks, but with planned tracks that has elevation based on HGT files ( filled by Locus itself ). In such cases, happen what is in your file, so elevation is based on earth surface and not the tunnel.

a) automatically (no idea how to do it now)

b) manually by selecting interval on track

Hmm, there already is partially done function that allows to cut off part of track. Such selection should be improved and used for this task and mainly also for a "Show statistics for part of track".

I already see in head some options, so thanks for this idea (even declined). I'll keep this in mind and I'm sure, solution will come during next months (together with mentioned idea).

Sorry to give you more work ;)

And loads of thanks for your concern about users needs !!

When you re-think, Menion, pls. also revisit the initial request. And this is not about fancy automation of vertical scale. It would be enough to allow the user to use + and - and move up/down, simply consistency with the horizontal features.

No logic offering one and denying the other, right ?

parameter to config.cfg file. Set it to "1" to enable vertical scaling. Expect that there will be some problems with colored background below chart as this scale break some optimizations for drawing.

Some more motivation for fine grain resolution and vertical zooming :-)

My first experience with setting=1 and tap the chart + button: unusable because X and Y both zoom at same time - see below. Most of time only zoom of X axis is required, and as

originally states zoom of Y axis is only required when a large vertical spike occurs. Could the Y axis have own +/- zoom buttons when setting=1, or just have Y axis +/- zoom buttons displayed for all users? 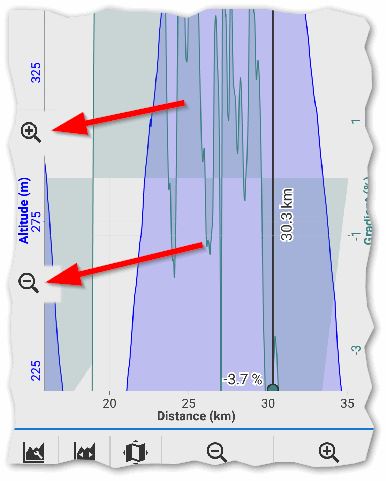