I recorded a track yesterday where I marked the lunch location with a "Quick point". Now today I wanted to change that point's icon - after that the track chart looked like this: 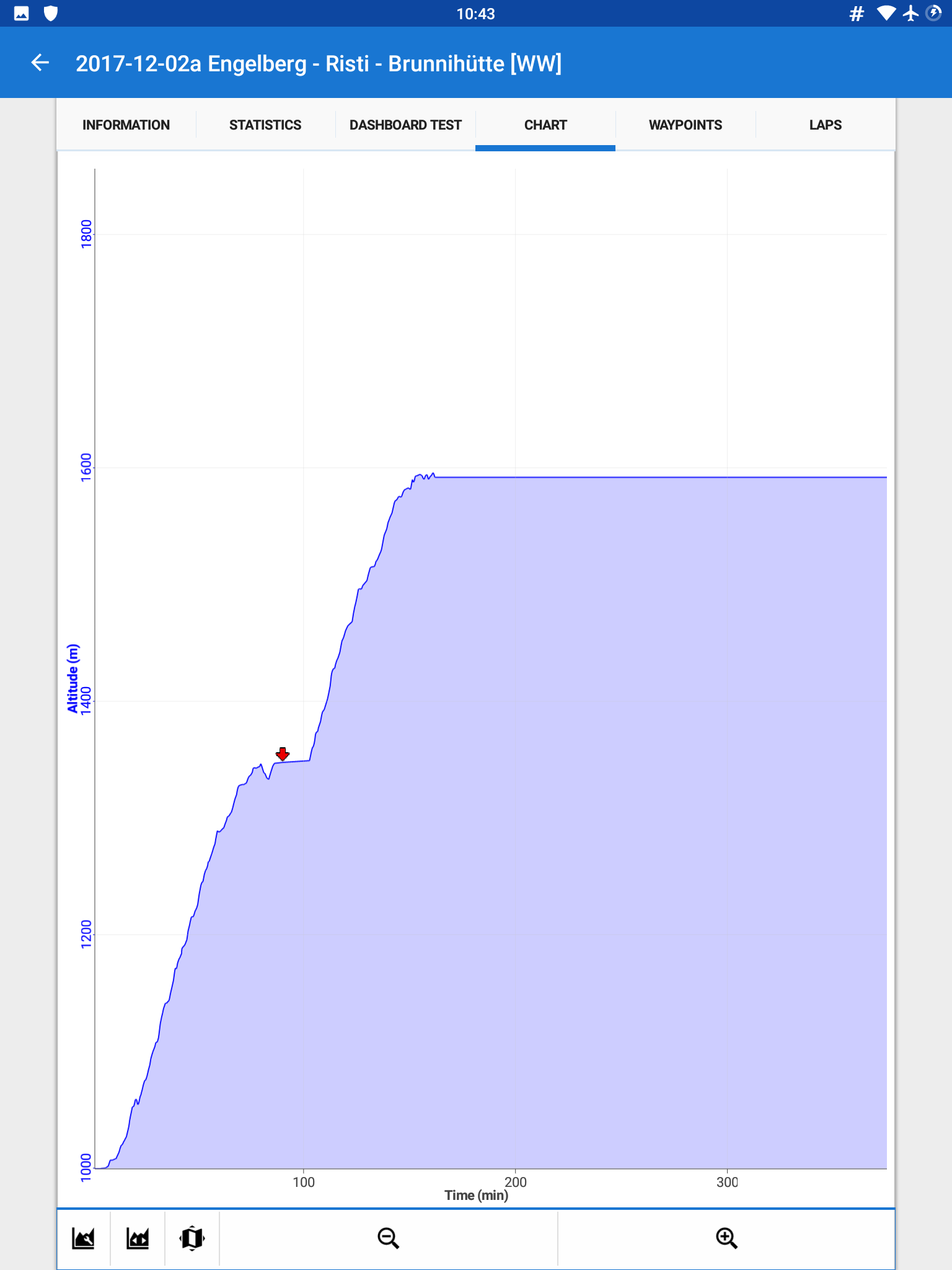 I assume the waypoint's timestamp got changed to the current time which now confuses the chart. I attached the exported GPX - I tried to fix it by deleting the waypoint, but that didn't change it. When I selected the long line in the chart I and did "Show on map", Locus crashed.

Please note that the one point still in the track is not the edited one. I added that later while editing, but also had a problem there: Instead of one, 7 identical points were added. I remember we had that problem before, but I thought it was fixed.

Anyway, editing a waypoint should not change its timestamp or that of any other trackpoint.

One more addendum: Editing the icon of a waypoint also not always works. Sometimes, it's shown correctly at first, but after restart, the icon's back to the default "arrow to the bottom" one.

Also, when I open the edit screen for an existing waypoint, it sometimes shows "GPS" as position and Locus tells me that my GPS is turned off. That makes no sense, because the point already has a fixed position which shouldn't be changed to the current GPS position anyway. Because I fear that might happen, I immediately choose Discard in these cases.

I'm suprised that such problem happen to you. I'm playing with it and I'm little desperate, because I'm unable to find some source of troubles. Anyway I've removed from app where I set time to waypoints for not clear reason, so hope this helps. Issue with "GPS" instead of coordinates should be fixed too, so ... next version.

Thx, looking forward to trying that out. I have to admit that I'm pretty sure I did that a few times before and it didn't always happen...

Did you also have a look at the "duplicate waypoints getting added". That I can absolutely reproduce: Whenever I add a waypoint via the waypoint list and the + button, several identical points get created. Number of points differs, but always more than one. I'm pretty sure that problem was reported when the Add waypoint function was introduced, but was fixed. I don't use it regularly, but I did sometimes, and I only say this happening again just now...

One user also reported this few (maybe) weeks ago, not sure but in latest Beta I hope this is fixed.

This all is connected to weird system I use for editing points/waypoints. Basic screen and editing screen are coded in same screen and just switch layouts. This cause quite a lot of troubles. In case of tracks, system was same and I already changed it few weeks ago ( because of this was some problems with saving tracks ), seems I'll have to really soon update also this screen for editing points ....

I tested it systematically with Beta 3.27.1.7: The chart was ok, but the new waypoints got still duplicated. I got some steps for display/replication: 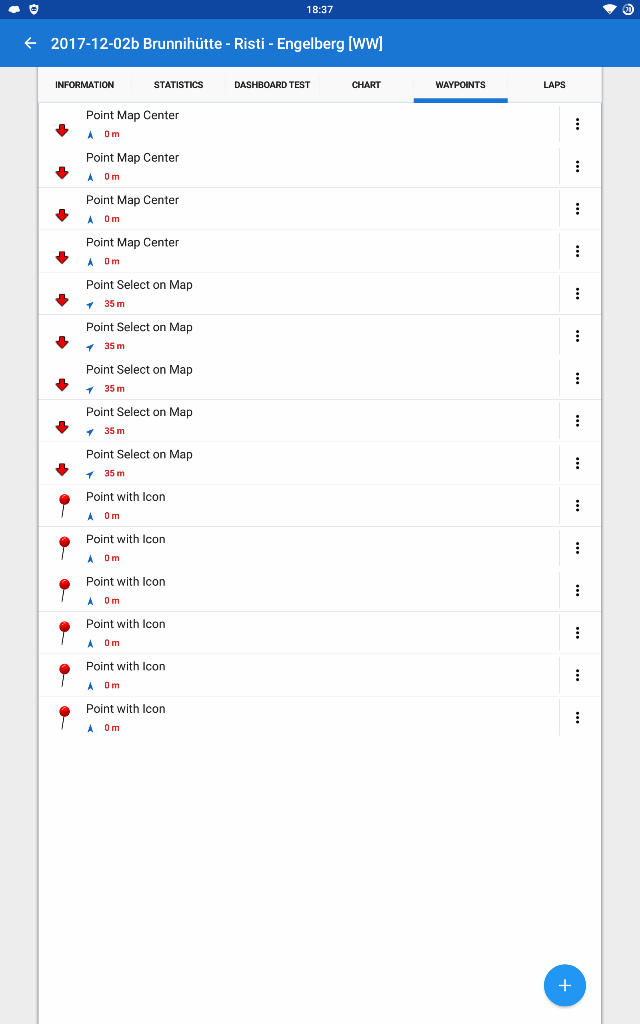 Now I returned to map - after few seconds Locus FC'd. After restart, the custom icon was gone: 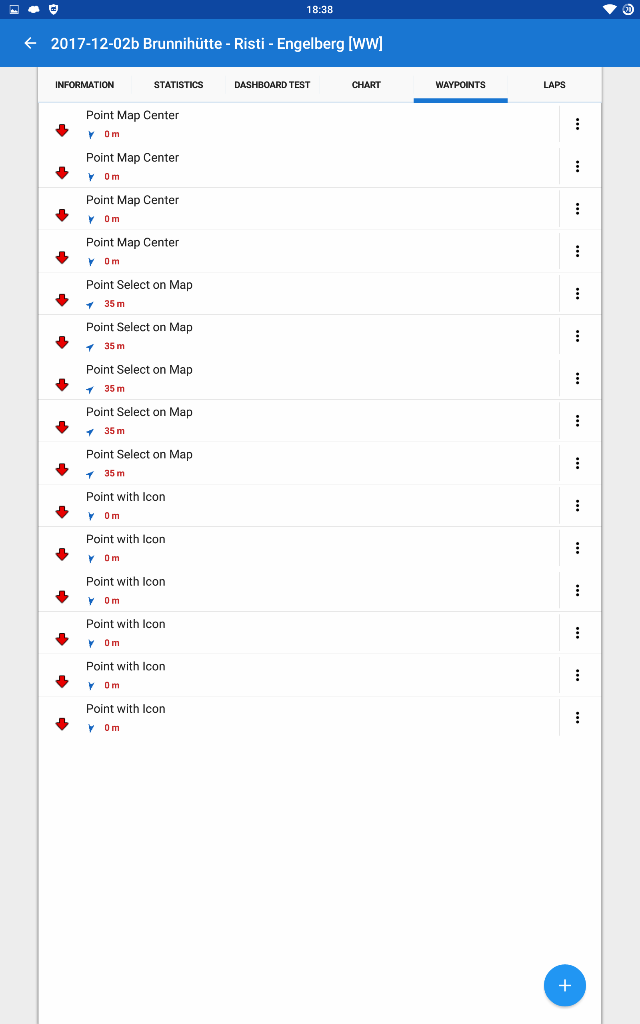 The attached GPX was exported after this.

PS: The chart still looks ok, but none of the new waypoints are displayed on it. Which makes sense as they're not part of the track. Question is: How could I add a waypoint that ispart of the track, like of it was created during the recording? Do I have to exactly focus a trackpoint?

another nice task on long winter evenings :). I was finally able to simulate same issue with duplicate waypoints ... and fixed!

Currently only waypoints directly placed on track ( usually made in planner by conversion from trackpoint ) should be visible on chart.

However, the icon is still reset after restart of Locus. If I change it again after restart, the new icon is saved. So it's only a problem if you change the icon at the same time as creating the waypoint - but that's probably the normal case, so that should work.

Btw, now the added waypoints are shown on the chart - did you change that in the end?

thanks for a test.

You are correct with icons ... believe that I've found possible problem, so fixed.

About icons on chart ... I'm checking source code and currently only points closer then 500 metres to track, should be visible on chart. This was not changed for a very long time so my previous information "Currently only waypoints directly placed on track", was not correct, sorry.

I thought it would be something with distance. 500m sounds a bit much, but the concept makes sense. I just wonder, what point will thee waypoint be attached to, if it has no timestamp? The closest? Anyway, no need to change anything there, should be the best compromise.

And thx for the icon fix, will test it in next beta, for sure :)

Yep, i should be closest. 500 metres ... sometimes it should be too close, sometimes too far, depend on activity. I've choosed it a long time ago probably as something "between", and I'm still fine with it :). Thanks for a feedback. Next version will be a final 3.28.0 probably in Thursday. Bye

3.28.0: Quick test, custom icon stays the same. So can finally put this topic to the archives ;) Thx!

I also just realized why I sometimes saw the waypoints on the chart and sometimes not: They're only displayed for "distance x-axis", not for time. Which is fine for me, just saying...

glad to hear we were finally success, perfect.